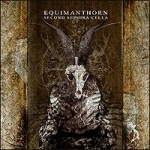 Once again Proscriptor has disembarked to stranger shores with his ritual music project Equimanthorn which saw an official review in 1993 with “Nimdinugga Nimshimshargal Enlillara”. Unfortunately I cannot compare the actual record with its predecessor but “Second Sephira Cella” definitely goes into the ambient / ritual direction with some ethnic Near Eastern influences, traces of trance music and a tiny bit of 70s psychedelia. In its entirety the project consists of (ex-) members of ABSU, ZEMIAL, MELECHESH and THE SOIL BLEEDS BLACK – the latter being a group creating very dense and enthralling medieval-inspired music enriched with electronic elements. And let me tell you – this album is a trip in itself. Long droning evocative soundscapes create an absolutely convincing ritualistic mood inspired by Sumerian mythology. The incantations and recitations come either whispered or spoken in a very deep tone, sometimes treated with effects, never sounding unprofessional or ridiculous (which is sadly the case sometimes when people from the Metal scene try something in the realm of electronics). Horns, string sections, and many well chosen effectsounds and synth arrangements add up to a floating and deep atmosphere, variating its tone so that no boredom may arise. The dreamlike, drifting mood predominates until the third track ‘Rule Of Utukagaba’ where eastern percussives find their way into the composition, giving another lively twist to the dramatic, hallicinative drones and soundscapes. The same goes for some synth lines that sound reminiscent to classic Psychedelia like Hawkwind. The ninth track ‘He Who Makes The Name Of Masshu Abundant’ incorporates some more modern percussive elements, not unlike some meditative trance music – rest assured, it fits perfectly well in there after you have listened to it some times. The scales applied throughout “Second Sephira Cella” are mainly of Middle Eastern origin – appropriate to theme and topic. One very small flaw on the technical side is to be found: there might have been a small mistake that occurred during the mastering I guess because some high frequencies are distorted in the tenth track – but this does nottmar the album in its entirety. Booklet and artwork are fantastic as well, dark brownish sepia toned sheets portraying Sumerian deities beside the tree of life, idols and reliefs, carvings sigils… if let your imagination float along with the moods conveyed by both music and visuals you almost get the feeling of being in a secret crypt beneath the temples of Ur, entranced by chants and incense.