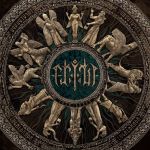 One of the Sumerian godfather Lugalbanda sons is called Gilgamesh and that is also the name of a Death Metal band from Munich. And like those two entities are connected in Sumerian mythology, in real life the link is named Emanuel Daniele, once the mastermind of GILGAMESH and know ready with his new band. ERIDU are presenting a concept album, maybe not the wisest idea for a debut. Or maybe just my personal prejudice, since I can hardly remember a concept album which convinced me. But "Lugalbanda" is one positive exception. The story is based in Sumerian mythology, dealing with battles between two kingdoms, divine powers, magic and so on. Sounds pretty cheesy, but it really works and the musical arrangement of the story fits perfectly. By using different styles of Death Metal the story is told and the listener is able to follow the drama which unfolds. Musically there is a huge BEHEMOTH influence, but ERIDU are not another dispensable clone of the Polish merchandise mongers. The typical mid-tempo Death Metal is refined by dynamic and epic songwriting, melodic guitar solos, expressive and versatile vocals, female vocals (‘The Bewitching Of Sumer’) and playful details. At some moments too playful, a stricter structure would have improved my impression. But that is the only slight criticism. This self-financed album is better and comes up with more creativity than most official label outputs. There is only one snag. "Lugalbanda" is only enjoyable when listened in one go. At times of Spotify playlists a challenge for some listeners, but it is really worth the experience. www.facebook.com/eriduofficial