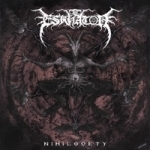 Dark, suffocating brutal Death Metal in the debut album of this Australian band, formed in 2010. The crushing guitars and the down-tuned chants of agonizing grief permeate the whole album form the very first seconds. Still, this is a musical style that very few can get out with a triumph. Pretty much like the brutal Black Metal style, which only a few are able to master ESKHATON fails short from that feature. To play in that dark and noisy aura that invokes early INCANTATION, IMMOLATION and basically all those 90s bands with that "-ATION" which are more serious about their riffs, is a risky game. I was expecting certainly a quality product here, based in nothing more than the label, owned by one of the members of the great DEAD CONGREGATION, a band which plays in that asphyxiating style but that has done it with such class that in my ears they are the nowadays masters of the style. And ESKHATON are following that school for sure, yet, their style needs to be a bit more diverse and less one dimensional to get that final quality touch it needs. The fact that separates many bands, this one included, from some other like the aforementioned Greek gods or fellow land mates of this band IGNIVOMOUS, is the subtle use of melody / harmony / hooks in that primeval chaos that the music is based on. Not an easy task, as the style has such a limited territory which can easily fail and turn into a charade.  Most of the songs feel like they can go higher, that they need a deadly break or a powerful interlude to close the hands on the throat. But, as stated before, this is their debut work, and for that, one can expect better things in the future.  www.myspace.com/eskhaton, www.nuclearwinterrecords.com