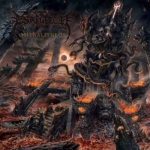 ESKHATON is a trio from Australia that plays a kind of extremely fast and extremely brutal Death Metal that reminds me of ORDER FROM CHAOS and BLASPHEMY speeded up with a bit of the insanity of SADISTIK EXEKUTION, and with some early MORBID ANGEL also coming to mind. This is their third album and it is a total ear massacre. Blastbeats, warped guitar riffs and absolutely manic solos create a dark whirlwind of sound led by grave vocals that seem uttered from an underground crypt in the best old school tradition, and all this with actual technique! With suitable artwork depicting a most hellish and chaotic vision (I guess some Satanic worshippers in front of the embodiment of chaos and evil, masterfully done at that), and great titles such as ‘Culthulhunatic’ or ‘Inverterror’, ‘Omegalitheos’ is an album in frantic pursuit of armageddon. Sometimes I was listening to stuff like the title track and I was thinking about how intense and insane Metal can be when it falls in the hands of maniacs such as these. Impressive is also the length of this album, an unrelentless 52 minutes holocaust of Speed / Death Metal. Sometimes one may wish for some more contrast, as the few moments of relative pause amidst the storm are few and far between. Still, this attitude of unfailing aggression does have an appeal of its own, even though at times, say, when you’re listening to ‘Omnilify’, among many other such moments, you are even hard pressed to make out the riffs, among all the noise and absolute drum mayhem (and not at all because of poor production… the music is just so convoluted). If you are into violent, primeval, yet well played and efficient extreme Metal (a most apt epithet in this case), this may very well be a bullseye hit for you. Check out www.facebook.com/eskhaton666, www.lavadome.org