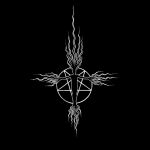 There are 14 bands named ETERNITY per Metal Archives. So it was easy for me to at first think I was going to be listening to the German band of which I was already familiar. Then I realized I was listening to the band from Norway and it all made sense as I thought they sounded different. And guess what… I actually like the Norwegians better. Their second full-length "To Become The Great Beast" is a glorious, Black Metal production that delivers with each and every song. The scaling, atmospheric guitars, the mesmerizing drums and the agony infused vocals are all created by one member… Evighet. The full band sound is proof of his skill at production and instrument playing. Capturing the glory days of Black Metal while staying prevalent is impressive. Starting off with ‘Sun Of Hate’, ETERNITY rushes headlong into the void with a blistering track of unbridled fury. ‘Bringer Of The Fall’ is even more aggressive as ‘Te Nostro Deum Sathanas’ vibrates and regurgitates into a heap of molten brimstone. ‘If I Ever Lived’ and ‘Horror Vacui’ are pure bliss. ‘In Subspecies Aeterna’, with its melodic guitars and thudding drumming teeters on the edge of something we’ve all heard before but still welcome regardless. The seventh track ‘To Become The Great Beast’, with its blastbeats and wall of noise guitars, is a mesmerizing song that keeps me entranced in this album. In fact, every song, including the final three tracks ‘Violator’, ‘Empire’ and ‘Nine Magic Songs’, are solid without any missteps. For anyone craving a delicious assortment of pure Black Metal from a musician who understands it completely, look no further than Norway’s ETERNITY. I, for one, am an immediate fan. For more information, check out www.facebook.com/eternitynorway, www.soulsellerrecords.com