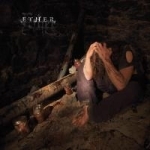 Some weeks ago an old friend was celebrating his birthday and we ended up pretty drunken at four o’clock in the night listenig to BURZUM and discussing the magic (or whatever anyone may call it) of this band respectively Black Metal in general. I do not want to bore you with our weird theories, but in my eyes Black Metal is some kind of romantic, because it is able to arouse strong feelings; recently I read an interview with Stephen O’Malley of SUNN O))) where he labelled Black Metal as “psychedelic”. When I listened to the debut-album of the canadian band ETHER I was immediatley reminded of that night. ETHER is a one-man project of Scythrawl, known from UNQUINTESSENCE and TRAILS OF ANGUISH. Since informations about the band are pretty rare, I know nothing about the band’s concept (all those who dare may visit the myspace of Scythrawl to learn something about the so-called “Heisenberg uncertainty principle” etc.pp), but I know it is genuine (early) BURZUM on this output. Maybe Varg Vikernes is even getting any royalties? No, seriously, just go and play this album and say that it is an unreleased BURZUM-demo, anyone would believe you. So anyone who is not into this very special kind of music should stay away, but all other who still adore the early BURZUM releases and who know that there is more in life than superficial consumption, the hunt for the next big trend, behaving like sheeps, walk in line etc. may get involved with the ETHER. Spooky, twisted, tormenting, archaic, angry, morbid, sepulchral, eerie Balck Metal. www.myspace.com/scythrawl. Label contact: www.sepulchralproductions.com