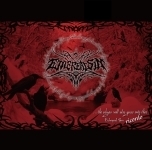 Japan might not be that well known for its Black Metal scene and I guess always the same names pop up when someone is trying to come up with some outfits from the land of the rising sun. The usual suspicious ones would be in most cases SIGH, TYRANT and ABIGAIL who are also partly well known for their quite original style / ideas and preaching not just lessons the old school way. Of course there are a couple of underground bands in Nippon which are mostly known by a few die hard fans only and which are dwelling a life in the darkest abyss there. ETHEREAL SIN are one of those hordes but if you expect raw and simple old school Black Metal here you will be completely wrong. This six piece outfit from Tokyo (originally from Osaka but relocated) raises the flag of melodic and symphonic dark art high. Since their procreation in 1997 these warriors tried to deliver an original and unique vision of that style. Unlike most bands in that genre ETHEREAL SIN avoid to have the emphasis just on their symphonic / melodic elements as they never neglect the Black Metal aspect and come up with a good ballance of both sides. "The Abyss Will Also Gaze…" saw its first dark light of day in 2009 as a limited own pressing (666 copies as ltd. digipak with two bonus tracks) but it was re-issued a few weeks ago by Evoken The Valhall Productions. After a short instrumental intro the band starts of with the fast opener ‘Autumn Dark’. This first track already showcases all facets these warriors from the Far East have to offer. A healthy mix of aggressive yet melodic blackened Metal with a grim (sometimes a clearer) male voice and icy female soprano chants. If they are used together the vocals have almost a kind of opera feel, but of course a haunting & dark one. Even the keyboards are permanently present they aren’t too dominant and keep enough space for the axes to devolpe some well executed, sharp riffs. The members’ throw in their longterm experience in making that kind of music which pays off without any doubt. What I enjoyed is also the fact that they keep the pace of their songs quite high e.g. in ‘At The Gates Of Bloody Ruins’. I am usually not so fond of symphonic Black Metal but ETHEREAL SIN can somehow convince me in delivering interesting, varied songwriting and the fact that the overall sound has clearly kept it’s true Black Metal roots. The production of this nine tracker is excellent without being overproduced. If you are a fan of that genre you should give them a try especially when you are disappointed by the musical direction your former idols headed into. Thumbs up from my side! More info you can fine here: www.ethereal-sin.com.