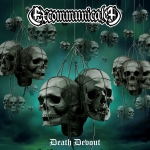 Cover versions. Some of them are great, some are not and some are pure atrocities. So, the result of releasing an album filled solely with covers is always a risky move. And North American Black / Death Metal outfit EXCUMMUNICATED has made such a risky move with their sophomore album, "Death Devout". And this time, it came out pretty good. The tracklist here is amazing, since they chose to cover songs from incredible bands such as NAPALM DEATH, DEICIDE, GRAVE, CANNIBAL CORPSE, MORBID ANGEL, BOLT THROWER and even ANAL CUNT and SAMHAIN. These last two actually work perfectly. The vocals are really good. Chad Kelly is constantly morphing into all the classic extreme vocalists showcased here. Guitarists Jonathan Joubert and Jason McIntyre pay homage to these great bands in an impressive way. And even though his instrument is a little buried in the mix, you can listen to Bruno Muenzler’s bass guitar pounding, specially in the heavier cuts such as BOLT THROWER’s ‘World Eater’ and OBITUARY’s ‘Intoxicated’. Now, onto the production. It is solid, although it varies throughout the album. In some of the songs, there is a lack of bass frequencies. Maybe the bass guitar should have been louder. The guitars are pushed back a tad too much for my taste or maybe the place where the guitar sound sits in the mix is not the optimal. Also, the drums are constantly battling the guitars and bass. I mean, Mike Heller’s performance is great, but the drums become so prominent that I had to take a break like 4 or 5 songs into the album. This time EXCUMMUNICATED got away with it. They gave these songs their own twist, but keeping the spirit and the atmosphere of the originals. Any respected Death metal fan should go ahead and give them a listen. I can assure you that you will be pleasantly surprised as much I was. Contact the band here: www.facebook.com/excommunicated-124129727678299. And get "Death Devout" from their label here: www.satanath.com