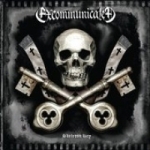 Louisiana-based Death Metal powerhouse EXCOMMUNICATED was formed out of the ruins of SUTURE, DESPONDENCY and CATHOLIC, featuring Chad Kelly on vocals, Jason McIntyre and Jonathan Joubert on guitar and bass – and David Kinkade (BORGNAGAR, ex-ARSIS, ex-DIVINE EMPIRE – among others) filling up a session drummer’s position on the band’s first studio album, "Skeleton Key". On this 10-track opus, which is a concept album – basically concentrating on telling a dark history of the medieval Catholic church (which is utterly beyond disgusting), the guys in EXCOMMUNICATED have truly succeeded in putting together a steady Death Metal record, with some mild overtones from Black Metal here and there, too (mostly vocal-wise though). Having been listening to "Skeleton Key" for 3 days in a row now, I am secure to say the band’s dynamic, crispy, eerie, multi-layered enough and mostly mid-paced old school Death Metal has made an indelible impression me; actually to be honest I have been pretty darn enthusiastic about the material on this album. Especially the wicked and murky guitar riffs – added with greatly done death grunts, seem to create a very firm backbone for the songs on "Skeleton Key". At times the band has got very dynamic guitar parts that stand-offishly bring the split-up Milwaukee Death Metallers DR. SHRINKER back to my mind (check out ‘The Incorruptibles’ or ‘Minutes To The Corpse Trials’) – and then at some other moments one can find the kind of guitar sections from the songs that throw you toward the records of IMMOLATION and why not, MORBID ANGEL even (‘The Vatican Orgies’). Then again, EXCOMMUNICATED can also take a musical Death Metal course that drops me somewhere in the early times of both Floridian OBITUARY – as well as Finnish SENTENCED (‘Christ’s Sword’). In fact, there are quite a lot of musical references to some other extreme Metal acts popping out from this record, which isn’t a bad thing by any means. "Skeleton Key" also features special guest appearances of Andy La Rocque of KING DIAMOND / X-WORLD/5 churning out one solo in ‘Christ’s Sword’, Vincent Crowley of ACHERON / WOLVEN SOCIETY doing some guest vocals in ‘Birth Of Tragedy’ – and last but not least Jayson Ramsey of ex-SUTURE doing the backing vocals in ‘When Claims Its Most Righteous Dead’, even if their input on the record is kinda minimalistic after all. Nevertheless, "Skeleton Key" stands out on its own feet (even without any guest musician appearances); it’s a surprisingly well-crafted and varied package of Death Metal that makes you go back this album over and over and over again – and that’s always a very good sign about worth checking releases around you, isn’t it? www.facebook.com/pages/Excommunicated/124129727678299