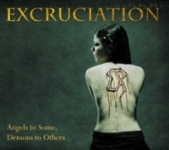 EXCRUCIATION
Angels To Some, Demons To Others
(Non Stop Music Records)
55:18min

Although the band was very active in the late eighties I heard of them for the first time now. “Angels To Some, Demons To Others” is the reunion record after 13 years. It’s hard to categorize the style of the music, maybe a little bit of Crowbar with some Death / Thrash influences. Really heavy, slow-moving riffs, sometimes filled with some melodic leads and all grounded from nice drumming and bass parts. Singer Eugenio Meccariello changes between growling, more recitative parts and melodic vocals. The songs are all very groovy, no really faster parts, especially short in the song ‘I Am’. The highlights of the record for me are ‘Like Hyde In Jekill’ with two styles of vocals all by Eugenio and a really nice hook. Also the next song ‘Arise’ is great because the dark voice of the vocalist gets a backing from a nice female voice. Track 12 ‘I Am’ is a highlight for me too, because it is more straight forward and has this nice speed part. During the whole playing time the songs are too similar in their structure unfortunately and I miss a little bit more variation. But I also know Doomheads don’t want this, so they should really check this record. All others risk a ear. www.excruciation.net.