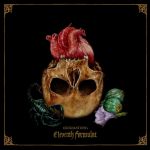 This is the third album of these extreme Death / Black Metallers from Indonesia formed back in 2008. I was able to get their second album a few years ago and nothing has changed and that, my fellow Metallers, is a good thing. Brutal, chaotic but also at the same time complex Metal of Death that reminds of bands like TEITANBLOOD, old MAYHEM and DEICIDE but also for fans of NIFELHEIM or IMMOLATION. It is very dark and asphyxiating, with a very ominous aura and a vicious atmosphere all the way around. And it is mostly fast all the way. There is also a lot of old school Death Metal references to the elder gods like POSSESSED, AUTOPSY and CELTIC FROST to name a few. And the production is just right in how raw it is yet, it sounds full and massive, the way this music needs. There is that charm that only few bands are able to conjure in the style without sounding too much like noise and EXHUMATION does a triumph over death in that sense. There are few Black Metal touches in just a right dose, but basically this is an ode to death and darkness. I think that I like their previous album a bit more, maybe due to the more chaotic melody approach, but make no mistake, this is still raw, evil and dark, and one just can feel the essence the band members are invoking in here: the cult of Death! More information at: www.facebook.com/exhumationdevotee, www.pulverised.net