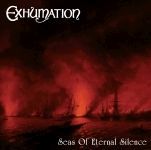 Before the well-known NIGHTRAGE, Marios Iliopoulos made his first serious musical steps with his first band EXHUMATION. The band started in 1990 with some rough Death Metal tunes before they moved into the melodic Death Metal direction in the mid 90s. Heavily inspired by the Gothenburg styled Death Metal, the band released their debut in 1997 via the small Danish Label RRS / DieHard Music. The 90s typical intro offers some keyboard sounds before the title track ‘Seas Of Eternal Silence’ offers the mentioned melodic Death Metal but with a really raw approach. Somewhere between DARK TRANQUILLITY during their "Skydancer" era, SACRILEGE and some other well-known bands of the Black Sun or Wrong Again roster, the Greek guys were pretty talented and offered some really good material here. Especially the changes in speed between fast and slow are pretty enjoyable. The keyboards are not overdone and even the more grunted vocals get varied by some clear vocals occasionally, so the guys were very far in their development. Even the solo in the middle is damn good and shows the skills of the musicians. The only thing which is a bit annoying is the triggered bass drum of this remix. This was sounding better on the original mix in my humble opinion. Apart from this little weakness the album offers raw and well played 90s stuff and is a must have for all fans of NIGHTRAGE and THE DUSKFALL as this is the real deal offering both, dirty and raw Death Metal with a melodic edge and damn good classic Heavy Metal tunes from a time, when not all releases where so damn polished. Especially this dirty edge has a big charme here and all fans of the mentioned bands can purchase this little overlooked treasure unheared. Those who are unsure should check out the title track or the instrumental last track ‘Monuments’ and will not be disappointed at all as even after more than 20 years these tracks stood the test of time. As always, Vic Records offers value for money and have added the four tracks of their third demo "Deepest Side Of Fear" as bonus to this release. More info can be found at one of these locations: www.facebook.com/exhumation, www.vicrecords.com