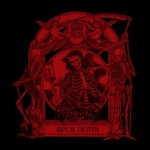 There are lots of things happening in Asia. Weather changed, political and civil rights changed too, the exposure and need to do new things also changed. For more than 3 decades Asia has become one of the places to think or mention about when you are in the middle of a discussion about technology, politicians and music, the last is what we care the most here, as I’ve always praised their passion for music. EXHUMATION is a band hailing from Indonesia, and play a mix of Euro-American Death Metal in a simple yet effective way. Their debut album was full of praise for early VADER and MORBID ANGEL with some Black Metal elements on top. The band moved forward and released their second opus aptly named “Opus Death” on tape back in 2014, then during 2015 Roy and the mighty Pulverised released this beast in CD format, and now in 2015 – 2016 Dunkelheit Produktionen is making it available worldwide in different formats so that every death monger can have their dose of old school Death Metal in the way they want. Going back to the album, “Opus Death” is a step forward in the right direction, with an early MORBID ANGEL meets SODOM riffs and devastating drums in the vein of early Death Metal jewels think IMMOLATION, INCANTATION, the vocals remind me more of the South American sound of the early 90s like a mixture of Death and Black Metal. So there you have it, if you are into bands like EMBRACE OF THORNS, TEMPLE OF BAAL or even MAVETH, go check this band out, they have a lot to offer, they even made it to album of the week for Ferniz back in November 2015. You can get a copy of this album and pay some respect at www.facebook.com/hailexhumation, www.dunkelheit-produktionen.de