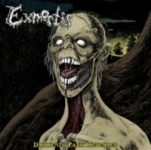 USA’s Death Metal machine EXMORTIS have returned from their decade plus hibernation. The band was formed in 1987, released several demos and an EP along the way, then suddenly disappeared by the beginning of the new millennium. "Darkened Path Revealed" is an all-in-one compilation that includes the "Descent Into Chaos" demo, "Immortality’s End" demo, "Fade From Reality" EP and "The History Of Things To Come" compilation from 1994. If you were not able to pick up these gems when they were circulating then I highly recommend you check out this album. Fans of old school era MORBID ANGEL, SARCOFAGO and DEATH should really give this album a spin. "Descent Into Chaos" starts out with an intro and jumps into ravage induced old school Death Metal via ‘Lords Of Abomination’, a track that blasts with thrashy guitars, guttural vocals, and blasting drums. Production wise the music is not polished by today’s standards, but it has that 80s nostalgic production that brings one back in time. The next track is the self titled ‘Exmortis’, same formula as the previous track of fast guitars, drum blast beats and some interesting solos. ‘Pathogenic Silence’ introduces a cool chugging guitar intro and then rips into full speed. You can not help but bang your head along with this jam and the demo ends with an outro. "Immortality’s End" opens up with a track by the same name that is a unique instrumental that crescendos into a whirlwind of a storm. Insane guitar solos and a fluctuation of speed between the drums and guitars makes this track a mandatory listen. Production here is a step up in all aspects, compared to "Descent Into Chaos", but the songs continue where "Descent…" left off. ‘The Resurrection’ and ‘Beyond The Realms Of Madness’ are excellent jams and they flow very well. ‘Casual Killing’ reminds me of "Leprosy" / "Spiritual Healing" era DEATH and runs on all 8 cylinders from start to finish. Half way mark of the album and enter the EP "Fade From Reality" which was recorded in 1991. Production here stands out and assists the music in grabbing you in a headlock or for your MMA fans a guillotine choke. The music here has more depth but does have hints of OBITUARY’s "End Complete" in certain guitar arrangements. The previously unreleased track ‘The Unforbidden’ packs a punch and is a blueprint for early 90s Death Metal. "Fade From Reality" leans more towards the doom side and tracks at just over the 6 minute mark. "The History Of Things To Come" is the final piece of the puzzle in this compilation. All three tracks crush and are catchy. The final track ‘Lamenting The Flesh’ is a sound clip from Hellraiser, a good outro, but I think if they had added some music to the track it would have sounded way better. Overall this is a great compilation. You get to hear the band’s history in one disc and how they progressed musically throughout. It is a breathe of fresh air from the current sound of Death Metal these days and reminds us that at one time there weren’t 100000bpm songs, but they were still epic. For more info: www.exmortis.us, www.facebook.com/pages/Exmortis/338753428121, www.myspace.com/exmortified, www.necroharmonic.com