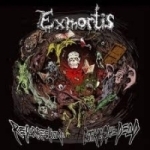 USA’s Death Metallers EXMORTIS have a new EP out titled “Resurrection… Book Of The Dead”. EXMORTIS also have recently had a release of their old demo material and EP in one album titled “Darkened Path Revealed”. Their new comeback EP runs at just under 18 minutes with a total of 6 tracks and leaves the listener wanting more. We start out with an interesting intro titled ‘Creation’ and then quickly jump into the chugging guitars of ‘Book Of The Dead’. The track is your back to basics Death Metal and has a thrashy sound which fluctuates from mid tempo to fast tempo. The vocals remain guttural and remind me of POSSESSED. The solos on this song are just insane and really fit the rest of song. ‘The Slaughter Begins’ really rips the speaks wide open and shows how well these guys can still carry their own. Head banging guitar riffs and a hint of Thrash thrown in to add some spice. Don’t expect double bass at 250 bpm, these guys keep it old school and simple with the bass drums on this song. Don’t get me wrong the drums are still badass but the band shows that you don’t need an insane amount of drums to get an awesome song. ‘And There Was Pain’ is where EXMORTIS shows a bit more in the songwriting and guitar chord structures. Chugging guitars in certain sections and blasting in others keeps the song entertaining. The song flows very well and punishes the listener with blast beats then quickly stopping before the lethal dose kicks in. ‘Deep Red’ has a “Seasons In The Abyss” – era SLAYER feel to it that I think compliments the EP very well. The guitar solos once again do not fail to impress and help carry the song to the next level. Overall a killer song that stands out not only for its unique guitar sound but is well written. The outro ‘Parade Of Chanting Ancients’ is an eerie piece that finishes off the EP in a simplistic manor. Overall this EP is well written and the production value compliments the music. EXMORTIS have really proven that they still have that “It” factor that makes them an excellent example of how to keep the torch burning throughout the years only to make a propelled comeback. Modern Death Metal bands take note as these guys helped set the bar and will not be dethroned without a fight. For more info: www.exmortis.us, www.facebook.com/pages/Exmortis/338753428121, www.myspace.com/exmortified, www.xtreemmusic.com