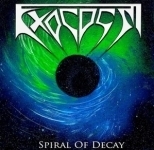 Progressive Thrash Metal really ain’t everyone’s game. However, there is always a bunch of new upcoming acts out there that try to tackle their way up from the underground, to find some breathing space among hundreds – or more logically, thousands of other bands on the face of the earth. The Finnish trio called EXOCOSM, is among them, pushing determinedly through the thickest rock, and fighting their way under some limelight of acceptance. EXOCOSM contains of 3 somewhat skillful young musicians that are musically hungry, and share basically the same goal: to fuse their Thrash Metal with some progressive elements of Metal music – and even succeeding at that kinda well, I think. Such names as VOIVOD, CYNIC and DEMIGOD’s later ‘Thrash’ era, push through EXOCOSM’s stuff occasionally, although in the same breath it needs to be said that the band still has a long way to go to reach the same professional level playing wise as those aforementioned 3 bands in comparison to EXOCOSM. Some parts tend to sound a teeny-weeny clumsy and rough here and there but overall EXOCOSM do deliver their goods pretty well and convincingly on this 10-track debut effort of theirs, considering how young the guys still are. Nonetheless, "Spiral Of Decay" is one of the better debuts I have come across in recent times though, and I should believe their next release will blow this debut release out of the water like 6-1. That remains to be seen, however. www.facebook.com/exocosm, www.facebook.com/htmproductions