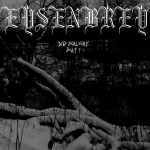 It’s been a good while since I’ve come across a new German Black Metal band, though the day dawned not long ago, as I was handed an album by a band called EYSENBREY and that is more or less what I know about the band and album. Eysenbrey, an old German surname, where parts of the family spread to the Benelux area, where the name was wretched in different paths. Parts of the family did also sail across the pond, and settled in Pennsylvania. If EYSENBREY here relates to that family, I can’t really say, though we might find out someday in the future, let’s now get to the music, which normally is the most important part around here. I’ve had a hard time to figure the music out, normally I’m getting into the atmosphere and feel of the music quite fast, and senses a direction, though not really here. First the programmed drumming is throwing me off, as it differs between decent simple and okay sounding background rhythms, to more complex patterns, in some where the sound of the toms changes from fill to fill, sometimes the bassdrum is defined and clean, at other times muddy and out of focus. A bit of the same goes in the mix, where the drum sound jumps a bit up and down, and that interacts with the overall mood of the recording and kind of kills the atmosphere, so I never really get sucked into the universe that EYSENBREY tries to create. Musically there are traces of some good raw guitar riffing, though most of the tracks are in need of some better songwriting that can bridge the different elements in the songs, as it a bit too often jumps a bit back and forth, and a mix and mastering job would do this release some help as well, as the music seems somewhat unmixed and out of sync, I can dust off some old demo tapes from back in the day, with a more balanced and focused sound than this. It is cool to have a mission to make it raw, and those of you who know me or my musical preferences, know that I like it raw, though this is just a tad too lo-fi for its own good, in my opinion. I like some of the puked screams, as they fit the overall picture, that I think EYSENBREY tries to accomplish, though the few positive elements on this release is simply not enough to make it worth the while for me. I simply miss some motivation, intensity and feeling, the music feels like a mission to do something, without the right means for it, and not all goals justifies the means to reach it! There are some good ideas and bright spots, but it needs quite some more work in the rehearsal room, in the studio and some better handling of the knobs on the mixing board, before EYSENBREY will shine through my headphones. More info at: www.eysenbrey.de