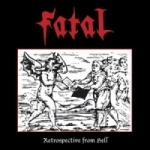 Here’s another excellent collection of classic 90s Death / Thrash Metal material, compiled by Necroharmonic Productions for the listening pleasure of all you historical interested extreme Metalheads… This time Detroit’s FATAL was chosen in order to immortalize their three demos and EP onto a single CD. The recording quality of the 17 featured tracks is incredibly good, especially if you consider their years of origin (1988 – 1990). You gotta remember that back in those days the main concern of almost every young band was first of all to put out music as opposed to worry about packaging or a professional studio sound. FATAL managed to deliver a very timeless quality nevertheless, yeah even the sound of their 1988 debut demo “Guts For Dinner” (which was simply recorded live with a 2-track recorder!) turned out way better than on most other tapes from that period of time. Musically this three-piece evolved from an extreme Thrash act with rather deathly vocals into an impressive, technical unity over the years. Especially the band’s 1990s farewell EP on Thrash Records (“A Somber Evocation Of Nihilism”), whose three tunes are impressively kicking this disc off, is a fine example of a technically skilled songwriting within the boundaries of extreme Metal. Those songs actually remind me a bit on a mixture of New Jersey’s REVENANT (especially when it comes to the vocals) with the complexity and love for little details of Switzerland’s CORONER. FATAL’s older stuff was still a bit more intense and right into your face and should easily appeal to all those of you who are pretty much sick and tired of what’s been going on in the underground scene the last couple of years. Apart from the already mentioned EP and debut demo, the disc also offers FATAL’s “Molested Slaughter” and “Soul Burns” demos from 1988 and ’89 respectively. The booklet features a short band history (written by original member Mark Nowakowski) as well as all the demo / EP covers and some vintage FATAL pictures. I just wished the band’s unreleased fourth tune from the EP recording sessions would be featured on here as well. That would have given the whole project an even more exclusive touch. But anyway, “Retrospective From Hell” is still a great compilation that you shouldn’t miss out on. For ordering information and all further details contact www.necroharmonic.com