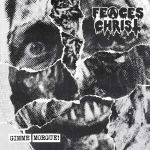 Is it really already one and a half years since I had the joy to review the demo EP “Eat Shit And Die!” from FEACES CHRIST? Damn, time flies! Back then, I expressed my hope to hear more from the Bavarian three-piece soon. Well, eighteen months are not really too soon, but now my hopes have been answered. “Gimme Morgue!” is the newest output from FEACES CHRIST, a full length album, and it’s on F.D.A. Records again. The general direction of the band hasn’t really changed – we still have a Hardcore – styled version of old fashioned Swedish Death Metal, with an added extra dose of REPULSION. But still there’s something more that has changed in the sound of FEACES CHRIST, as there is some more variety and some rather unexpected songs. Especially ‘Fulci Lives’ is a song I really fell for, a somehow grindified short and catchy Punksong with the potential to become a real ear worm. ‘People Piss Me Off’ also has some distinct Punk vibes, especially in the guitar leads, while ‘Two Wheels Are Better Than Four’ takes a decent and tongue-in-cheek nod to VENOM. And ‘Video Nasty’ even quotes the SEX PISTOLS. On the other hand there are tributes to ancient Grindcore and proto Death Metal like the final ‘Embalmed In Vomit’, short attacks like ‘Bar Fights’ and gross humour like ‘Rancid Romance’ or ‘Rest In Piss’. So, there is something for anyone into old fashioned extreme music and entertainment with a wink. And since I really like all that I have heard on “Gimme Morgue!”, I can only recommend this album and advise all like-minded sick old geezers to check either www.facebook.com/feaces.christ or www.facebook.com/fdarec