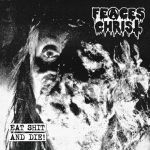 The always busy German F.D.A. Records started a new series of releases, presenting demo recordings of new bands to a (hopefully) greater audience. Among the first four releases of this series is the second demo of the German three piece FEACES CHRIST from Regensburg in Bavaria. The musicians hide behind the abbreviations A., C. and D. for reasons unknown. Although the demo is titled “Eat Shit And Die!”, this is not another Porngrind band or something musically similarly unappetizing. Instead, we have a unique form of Death Metal with a pretty huge Hardcore impact. As a clue, imagine old Swedish Death Metal (especially early DISMEMBER came to mind) played by a Hardcore band. This means, the songwriting is pretty compact, without frills and furbelow. Sometimes the songs are damn short, reminding me of old fashioned American Hardcore tunes from the 1980s. Thus it is no wonder that FEACES CHRIST blow up seven songs in just sixteen minutes. And these sixteen minutes are very diverting and refreshing, thanks to very variable vokills, dismembering guitar leads and punkish bass breaks and intros. Songs like ‘Spit Bath’ or ‘Postmortal Romeo’ are pure joy of aggressive, punching Death Metal while the short massacres ‘Charlie Had Kids’ and ‘Bottle Knife’ are some of the heaviest Punk songs I ever heard. I can only certify that FEACES CHRIST released some very tasty stuff here and I hope to hear some more from them pretty soon! Visit www.facebook.com/feaces.christ and www.fda-records.com for more.