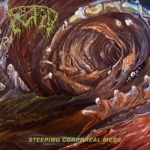 Portland, Oregon’s FETID, originally named OF CORPSE (and thank god they changed it), since 2013 have only released an EP (2017’s "Sentient Pile Of Amorphous Rot") until now. With their first full-length "Steeping Corporeal Mess", Clyle Lindstrom (guitars, vocals), Jullian Rhea (drums, vocals) and Chelsea Loh (bass) have recorded a group of songs that the album title describes pretty accurately. The band clearly conveys their gory, putrid message through five doomy, murky, deathly tracks. The opener ‘Reeking Within’ takes around 35 seconds before the throbbing guitars kick in. The drums slam fiercely at uneven (on purpose), ever-changing beats as the guttural vocals sound as deep, as low as humanly possible. So submerged that they almost seem hidden in the mix, trying to burst out of their demonic cocoon. The thudding bassline of ‘Cranial Liquescent’ weighs in while the stumbling guitars shamble forth before wreaking havoc once the pace picks up. FETID remind us what down and dirty Death Metal should feel like. None of this progressive, tech stuff… just a muddy yet berserk amalgamation of all early forms of Death Metal thrown together in a turgid cauldron of fecal matter. ‘Consumed Periphery’ charges along like a steam-engine from hell, rolling over everything in its path. ‘Dripping Sub-Tepidity’ (whatever the hell that means) is a harsh track that solidly stays within the perimeters of consistency throughout this album. ‘Draped In What Was’ ends the 32 minute Metal monstrosity which is "Sleeping Corporeal Mess". What at first sounds like John Carpenter’s Halloween theme rewritten, winds up morphing into a guitar-driven mass of swirling ichor and infected riffs. FETID are an abominable force to be reckoned with. If you like your Death / Grind rotten and encrusted with blood-drenched grime, this album is for you. For more information, check out www.facebook.com/fetid.death, www.20buckspin.com