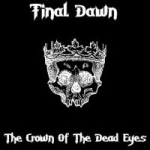 FINAL DAWN
The Crown Of The Dead Eyes
(self-financed)
30:44min

Finnish melodic Thrash / Death Metal act FINAL DAWN ain’t any rookies anymore. The band came into existence in 2000 – and during 12 years or so, the band’s release catalog has been increasing to 4 demos, 2 EPs and one full-length album. FINAL DAWN’s only record, "Under The Bleeding Sky", was released on Dutch Neon Aeon Media (which parent label is Karmageddon Media) in 2004, so it’s been a while to have a continuum for their debut record. "The Crown Of The Dead Eyes", this 4-track release, containing over 30 minutes of new stuff from these Finns, is just a self-financed CD-R EP, which will hopefully do the needed trick to get FINAL DAWN signed to some label again. I mean, FINAL DAWN have truly got a significant amount of musical potential to catch a few pairs of extra ears to their side by these 4 compositions that are presented on this well-crafted EP. Most of the time, FINAL DAWN rely on these big, whole horizon-painting, very epic and crushingly heavy guitar riffs that are accompanied with a powerful use of oppressive melodies – just like a song called ‘The Crown Of The Bled Eyes’ for example, works as a good prove for all that. It clocks in at 13:05 minute mark – and even if it feels like an overly lengthy song, oddly enough there’s no dull moment in it at all. It’s a somewhat perfect blend of BLACK SABBATH-esque heavy riffs, mixed with some certain, tiny elements from Black Metal. Just try to imagine melting some of those oppressive and cold atmospheres that IMMORTAL had on their "Sons Of Northern Darkness" album together with some knee-crushing epic moments of "Mob Rules" era BLACK SABBATH – and voila, there you have it! It’s truly been a while since I have heard a masterfully composed, epic song like this. ‘The Crown Of The Bled Eyes’ is undoubtedly FINAL DAWN’s so-called ace of spades track of their very own, more than anything – simply an awesome song in its all majesty shining bright through it. The rest of the 3 songs basically follow the same formula, turning out to be relatively lengthy too (without challenging ‘The Crown…’ in its mammoth-like lengthiness though), in which FINAL DAWN have loosely given a treatment to combine bits and pieces of Death, Thrash, Black and Heavy Metal into 3 solid songs. Extra pluses are deservedly given out for a very audible bass sound on this recording too, plus also for FINAL DAWN’s (hard) attempts to obtain some originality and sheer uniqueness into their sound. This band is ready for war, i.e. their follow-up album. Any takers? More about FINAL DAWN at: www.finaldawn.fi

FINAL DAWN - Under The Bleeding Sky - by Stefan Franke