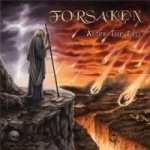 FORSAKEN
After The Fall
(I Hate Records)
56:20min

Doom. Doom METAL. Yes, with capital letters. I have been following the career of this band from Malta for very few years…I mean back from their “Requiem” demo in 1991 I received from them… and now, in 2009, I have been exposed to their latest album, actually their fourth one, and I am blown away. This recaptures and recalls the glorious sound and the heaviness of CANDLEMASS with a slight flavor of early SOLITUDE AETERNUS and of course the best HEAVEN AND HELL takes one can imagine (could have said the more known name, but leave it like that). Doom Metal is meant to be played with passion. It is to be played with conviction. And Doom Metal is not meant only to be slow music. NO. Doom Metal is more. Like a tyrant carrying heavy chains, but with such force he seems to be about to be released. Doom Metal is that. And FORSAKEN captures it with such an amazing ease. The heavy, omni-present guitar tone is there. The punishing drums make a perfect team with the encompassing bass. Add to that a charismatic vocalist and the formula for perdition is conjured. So it is the power of this record. It totally surpasses the last CANDLEMASS record, both in terms of musicianship, creativity and heaviness, and let me tell you that I loved that record. The solos are just nothing short of fantastic in the gifted hands of guitar visionaire Sean Vukovic. The band was not only wise enough to create such a monumental album, it does starts spitting perdition with ‘Tenebrarum’ and keeps the momentum at ‘The Lord Sayeth’ but they even dare the bastards to rise the fire to immortal proportions with the closer and über-magnificent ‘Metatron And The Mibor Mythos’. And yes, I am afraid these fine doomed gentlemen might be drifting towards a Christian view of life. But it is a wicked sort of way of taking religion upon music. It feels more like “The last temptation of Christ” essence that your normal preaching type of Christian band. No, these people of god are angry. The great cover art depicting a somewhat divine old man while watching meteors strike the earth, snakes and skulls included, tells us a lot. They are envisioning perdition and damnation. And instead of trumpets, they cherish the day of judgment with soul-stealing guitar riffs, enchanted vocals and what the meaning of heavy sins are all about. This masterpiece alone makes me want to go back and listen to their other materials, to see how they rank among this vengeance-filled angel of darkened wings monster of an album. For those followers of the dark lord, this oh, so great piece of damnation, no matter which sides proclaims as a king, is of such a bleak vision, that even the demons will agree. The Doom Metal album of the year. And probably one of the best albums released in any genre in the past years. Get it. At any cost. Even that of your soul. www.myspace.com/forsakenmalta, www.forsakenmalta.com, www.ihate.se