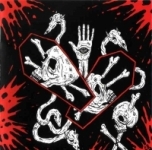 FUNERAL was another band formed after AUTOPSY’s split up. With a line-up that consisted of Steve Digiorgio (bass), John Shafer (drums), Aaron Gustafson (guitar / vocals) and Eric Cutler (guitar) they recorded one 6 song demo and a 4 track rehearsal in 1996. So Aphellion Productions has put both these underground rarities on one CD. It would’ve been more logical to release it as a split with DOOMED in these ecological-minded times, because frankly it’s a waste of CD space as the whole thing runs for 27 minutes and I would say that only demo tracks are worth being released on CD. They perfectly convey gloomy atmosphere, sort of like a mix between slow AUTOPSY moments with a permanent WINTER influence. With songtitles like ‘Dead Stare’, ‘Funeral’ or ‘Place Of The Skull’ you pretty much know that it won’t be an easy and joyful ride. The rehearsal tracks are purely instrumental and might be interesting only for die hard collectors of AUTOPSY and related projects. Decide for yourself whether you want to pay 10 pounds for it, as the material here is very good but definitely not excellent. Label contact: www.aphelionproductions.net