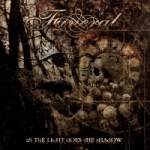 FUNERAL
As The Light Does The Shadows
(Indie Recordings)
71:56min

When compared to the other sub-genres of Metal, Doom has not received as much attention despite its equal diversity in musical composition. Norway’s FUNERAL occupy the highly contestable Melodic Doom / Death slot and, as far as I can tell, live up to their classification fairy well though there is little Death Metal detectable in their heavy, and reasonably paced riffs. There is a definite feel for the epic in FUNERAL’s songs. The music alone provides a kind of narration all its own. In this respect, FUNERAL share a great deal in common with Viking Metal, another genre with a thousand sub categories of its own. At times the vocal work can erode one’s patience, but the accompanying guitar passages, which are dark and evocative, more than redeem the oftentimes annoying bellowing. If this album is any indication of FUNERAL’s past, present, and future endeavors, it would not be unreasonable to guess that they’ll likely do something comparable to THERION in that it will sound nothing like the previous album, but still retain enough of the band’s character to let fans know that the musicians have not forgotten themselves. If you’re feeling adventurous, give FUNERAL a try. www.myspace.com/doomfuneral