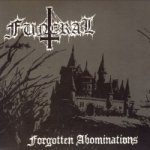 Released for the first time in 2004, this quite forgotten piece of deathly Doom was re-released lately by the hellenic warrior Anastasis of Nuclear Winter Records. Knowing the man’s tastes, I was pretty sure that FUNERAL should be a pretty solid and deadly act before I heard its music for the first time. Stemming from Sweden, I am quite rejoiced to hear that the band’s sound is not tainted by the overdone Sunlight production. Of course there’s obviously the Swedeath touch in FUNERAL’s music. I think of the heavy rhythmic section supporting some eerie / horror like melodies. I also think of the almost punkish drum parts à la early  ENTOMBED when the band starts to play faster. But these are pretty light elements of FUNERAL’s music. The doom parts  prevail but we’re not confronted to the doomiest of Funeral Doom, as the name could induce us to believe. I find FUNERAL to have pretty good hooks and enough catchiness all along the 3 tracks of this MCD. It’s interesting to hear that there’s a good balance between slow, mid tempo and fast parts. The somewhat shrieky and raspy vocals might lean towards the most sinister of Black Metal style and fit the songs pretty well. It’s all about creating a somber mood and I think FUNERAL really reached its expectations. This said I think that this MCD sounds pretty good, but is maybe not an essential item. I miss the little undefined spark that gives me a total gut feeling about this band. Fans of early Death Doom acts like ASPHYX, CATHEDRAL (demo era), THERGOTHON might feel some appeal to FUNERAL though. www.nuclearwinterrecords.com