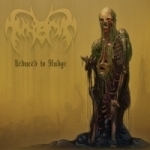 It’s been a while since the release of the first FUNERUS album in 2002 and many things happened since then: vocalist and founding member Brad Heiple (now in ABYSME) and drummer Kyle left. A new drummer was found in Sam Inzerra and bass player Jill is doing a great job in the vocal department. I would say her voice fits better to the FUNERUS sound than her predecessor. She already took over the vocal duties on the European tour in 2005 and she did it very well. So I was really looking forward to a new FUNERUS album with her voice. Another reason for my impatience was the fact that I absolutely loved their slimy rotten Death Metal on the "Festering Earth" album. Hell yeah, that was (and still is) a great album BUT "Reduced To Sludge" is even better. All 11 songs are great and you won’t find a weak song on this album, but the title track and ‘E. Histolytica’ are my personal highlights. Both compositions are outstanding hymns!!! This is abhorrent and vile Death Metal at its best. Sure, FUNERUS won’t reinvent the genre and I really appreciate they didn’t try that. They are just perfect in what they are doing: creating morbid, mind raping Death Metal anthems. "Reduced To Sludge" was mixed and mastered by Dan Swanö and Mr Swanö obviously knows what he’s doing. The production is excellent. "Reduced To Sludge" sounds very dynamic and powerful and on the other hand very dirty, raw, rotten and cruel like hell. Well, to sum it up: this is one of my personal highlights of 2011. Better believe me and get your fingers on this outstanding gem of rotten to the core Death Metal, you won’t regret. www.myspace.com/funerus, www.funerus.com, www.ibexmoonrecords.com