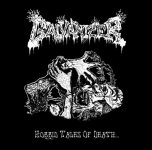 Long gone were the glory days of acts like CONVULSE, PURTENANCE, DEMIGOD or even ADRAMELECH. Not to mention that grinding vets in LUBRICANT, XYSMA and PAKENI for example. While most of the aforementioned were put to rest, a new wave of Finnish Death Metal came to life and spawned lots of very good bands to finally bring back the land of the thousand lakes on the map of traditional Death Metal. But to be honest, I was missing something. Most of them were just lacking that dark, dense and morbid, yet twisted touch of those from back in the days. And while there were some of the ancient ones, who thought that not everything’s been said and done in the past and exhumed themselves in a more or less superfluous way, there were these three dudes from Laitila / Tammela, who decided to gather the best elements of 90s Finnish Death / Grind and so the gory bastard GALVANIZER was born. To make a long story short; "Horrid Tales Of Death…" offers everything you need and expect from such a release out of Finland. You got brutal, hoarse grunts, up tempo parts and nice old school blasts going hand in hand with that classic morbid atmosphere which their ancestors once created and been famous for, as well as that typical grooving parts which you are able to witness for example in ‘Wounds’ . The opener ‘Mental Vortex’, as well as the fourth track ‘Cadaveric Lust’ also incorporates some well dosed synthesizer sounds to give the songs that special sick note like in ‘Left Hand Path’ (ENTOMBED) or maybe ‘Furnace Funeral’ (BLOODBATH). Due to Javi Bastard’s mastering skills at Moontower Studios, the listener is even able to recognize the bass playing which is not that common. The artwork of Finnish artist Luxi Lahtinen completes the picture of a possible future classic. Mark my words ladies and gents, maybe the four tracks on "Horrid Tales Of Death…" are kind of immature here and there, but considering the very young age, this is more than just respectable. In the end their role models were just as little virtuosos in their early days, however they got loved and respected in the underground. I’m not able to predict the future of GALVANIZER, but I’m damn sure that a hopefully upcoming full length will be a serious rival and pain in the ass to some of the bigger names from Suomi. Thumbs up and an unconditional recommendation as this is the best Finland has to offer since KRYPTS and DESECRESY! Get in touch immediately and buy that soon to be rare 7". For more details and / or information: www.facebook.com/galvanizerband, https://galvanizer.bandcamp.com, www.equinoxdiscos.es