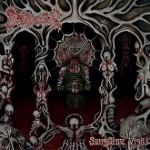 From the obscene and mysterious terrain of Finland, GALVANIZER emerges out of nowhere and has quickly become a flag bearing underground act with their defying approach to combine innate energy and sound which congregate the spirit of classic Finnish Death Metal and vicious Deathgrind. After initiated with two demo tapes and a 7” EP, GALVANIZER materialized their debut full-length album “Sanguine Vigil". This debut effort is released on CD by prestigious Everlasting Spew Records (Italy) at the late end of February 2018, which is prominent for their uncompromising passion and dedication into the genre of Death, Grind and Doom Metal. The MC version will be available in the US by Headsplit Records (US) and in European territory by Extremely Rotten Productions (Denmark), and the vinyl version will come later from Me Saco Un Ojo Records (UK). Recorded at Shed Studios in August 2017, where recording and mixing conducted by Juha Matti Kauppinen, this record offering nine original grinding Death Metal executions and one cover of an old NECROBIOSIS song from the golden ages of total death. The sound of GALVANIZER is firmly rooted in the very depth of Finnish old school of madness while blending of slaughterous Deathgrind hints their twisting and transformation with classic Swedish Death Metal sound. Aleksi Vähämäki (guitars, vocals) expressed that "Expect the same primitive Finnish grinding death madness but this time much faster and brutal!”. After the initial exposure to this record, you will definitely find a lot of the same points about carrying the spirit of elder entities like MACHETAZO, XYSMA, ABHORRENCE, HAEMORRHAGE, old DEMIGOD, ADRAMELECH, DEMILICH and also many other maniacs who unite abhorrent visions and Death Metal with bloody fervor, which will definitely ignite and possess the followers of such sonic expressions. Despite the fact that “Sanguine Vigil” is the maiden full-length debut of this band; but from the very first note it’s immediately manifested that how well these three gentlemen acted and juxtaposed sonically with each other. In a meager thirty minutes time they fired ten razor-sharp raids with malicious, low-pitched riffing, concisely deafening basslines and heavy blast beats greet while their mind bending switched over to ruinous mid-tempo pieces, which can grabbed the exposed one with a feeling of nauseating nothingness. Although most of the songs are progressed with fast-paced parts, the Scandinavians incorporated crusty and harmonious passages that are apparent right from the beginning and connected seamlessly with their dreadful visions. Initiated with the ‘Mood For The Blade’ to ‘Enjoyment Of Annihilation’, will swiftly transport you unto atmospheres of old horror movies, where the victims are unconsciously facing unthinkable and unimaginable doom. The prevailing and uncompromising bass line from ‘Gorefestation’ could roar in your unconscious mind for long, whereas the inward ‘Premature Rot’ and savage ‘Unfinished Autopsy’ will turn with neatly percussions and sanity devouring growls like a hungry beast. The mind altering album artwork visually expressed the inner essence of this record, which is painted by legendary TG Rantanen, a Finnish Institution of otherworldly visions, renowned for his works with DEMIGOD, ADRAMELECH, DEMILICH, ARCHGOAT, FUNEBRE, DEPRAVITY and many other acts. GALVANIZER is probably one of the most exceptional and repulsive old school Deathgrind bands you can find right now and their debut effort “Sanguine Vigil" roars for itself, for which they can be labeled with certainty as a band that can keep galvanizing us all in a long way. Find out more at: www.facebook.com/galvanizerband, or visit their label: www.everlastingspew.com and their Bandcamp page: https://everlastingspewrecords.bandcamp.com