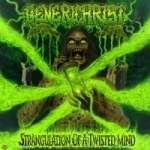 Let’s start this review off with the Californian weirdos GENERICHRIST’s whole biography, which is to be found from their official homepage: "GENERICHRIST was formed in 2002 by Tony Anderson who became tired of the scene and what it had begun to stand for. The band has been spreading their Thrash / Death Metal laced with Punk Rock for the last ten years!!! Thrash. Fuck. Kill!!!!" That was it. Informative? You bet it is – or who would possibly need more info from them than that? GENERICHRIST that were formed 10 years ago, have only made some EPs and split releases with some other bands so far – and these Punk-Thrashers latest offering does not make an exception to that rule either. "Strangulation Of A Twisted Mind", this 7-track EP from our lovely wacho and restless fellows, is actually pretty much fun to listen to. It’s a hybrid of true Punk attitude, Thrash and Grindcore – sort of reminding me of a mishmash of CRYPTIC SLAUGHTER, SACRILEGE B.C. and REPULSION in one face-ripping package. The guys clearly count on absolute rawness, sheer brutality and primitive sounds of sonic violence within their songs, just letting their steam out through their songs with such an intensity level that puts a wide grin on people’s face. It’s really good ‘n’ friendly violent fun, attacking violently with a middle finger raised high in the air – either you like it or not. It’s that simple indeed. GENERICHRIST do have some certain appealing charm to their stuff they do, and I cannot lie playing this EP made me actually pretty darn cheerful and stress free. Sick stuff. www.generichrist.com, www.areadeath.net