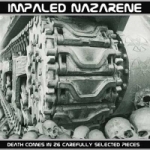 It was about time IMPALED NAZARENE indulge themselves into the perilous exercise of a live recording, considering they have toured Europe and beyond on a constant basis since their inception fifteen years ago. The actual recording of this live compilation was done last December (2004) in the IMPALED maniacs native country, Suomi, after having been postponed numerous times during the last European tour. In the end, it was surely the best decision to take, because IMPALED NAZARENE appear here in a relaxed mode and in total confidence, adding a lot of feeling to this excellent album. I am not a fan of live albums (even the classic ones bore me to death) but I have to acknowledge the perfect quality of this offering. The sound is crystal clear and powerful and underlines the total mastery of the musician involved. It becomes impossible to resist the enthusiasm and energy emanating from this record after a while, so much IMPALED NAZARENE demonstrate how well-seasoned they are on stage. “Death Comes…” offers a very large selection of tracks taken from each and every IMPALED album, from their chaotic Black Metal debut to the MOTÖRHEAD-ish assaults which characterize their following releases from the mid 90s to now. Even if I can’t say I am a fan of this band myself, it is obvious that this live record is a mandatory purchase for all those who cherish this bunch of sickos and I know they are many. One last thing: I particularly appreciate the healthy attitude which sums up IMPALED NAZARENE. Nothing better than a gang of maniacs here to entertain their public and have fun to do so: this live record brings another proof of that point; let’s say IMPALED NAZARENE are a perfect Heavy Metal band in that regard, it is well enough for me if you ask.