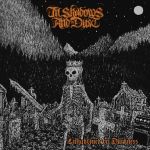 With IN SHADOWS AND DUST, Stephan Thirion from France realizes his own vision of Death and Black Metal. Album number four is called "Enlightened By Darkness“ and after three self-released albums, Stephane is now working together with Redefining Darkness Records. Everything else remains the same apart from the slowly developing change away from melodic Black Metal into a more HM-2 adoring sound which has already appeared on the predecessor. Still a mixture of DISSECTION, NECROPHOBIC and GRAVE, Stephane offers a very angry mixture of his influences without sounding boring. The presented eight tracks plus intro are still rooted in the melodic Swedish Death / Black Metal of the 90s but the HM-2 painting is more dominant than ever and offers very dirty and raw Death Metal with fine melodies and good instrumentation. The production is very tight, enriched by good drumming, groovy guitars and fine leads and very rough vocals. Stephane really has developed his style and songwriting and songs like ‘Deathlike Silence‘ are crushing neckbreakers. The mixture with his deep grunts and the Black Metal rooted Death Metal works out petty well and so the album sounds pretty tight. The only little weakness is that the melodies are a bit in the back but the quality of songs like ‘Dawn Of A New Day‘ is definitely there. The mastering has been done by John-Bart van der Wal, who did a decent job with the material. The cover artwork might not be the taste of everyone but I like it as it is well-chosen and not typical Death Metal style. Fans of this project but also fans of classic Death / Black Metal should give this output a chance. More info can be found here: www.facebook.com/inshadowsanddust, www.redefiningdarkness.com