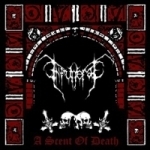 Grit your teeth, because this MCD accelerates from 0 to 60 in less than a second. Sweden’s INFUNERAL follow up their recent album, “Torn From The Abyss” (released in January of this year) with “A Scent Of Death”, the MCD I presently have the pleasure of reviewing. The first track, a thrashy WATAIN-like powerhouse titled ‘Beyond The Glowing Stars’ inaugurates INFUNERAL’s 5-track assault. For better or worse (okay, better) Black Metal from all over it seems have abandoned the "Transilvanian Hunger" style for a reunion with the rest of the Metal world. For the second song, ‘Anglamakaren’, the band uses slow, discordant notes at first, then steadily build up to a break neck speed; the vocalist sounds like he’s incanting a spell as much as singing. This track in particular should please fans of fast melodic bands like LORD BELIAL. ‘Cloak Of Death’, third of the five on this release, starts off sometime in the mid-90s, with MAYHEM-derived DARK FUNERAL riffing, but gets better, blooming into a melodiously bleak song. This melancholic tendency elaborates yet further on track 4, ‘Supremacy’. Though it sounds well produced and well played, I find songs like these a little boring, part of the reason in fact why Black Metal seemed in such dire need of a facelift. ‘Supremacy’ is repetitive and an anachronism. Do not mistake my personal distaste for the song as a recommendation not to buy “A Scent Of Death", however. It’s a fine record. And almost as if to spite my criticism of track 4, ‘Into Silent Slumber’ (track 5), repeats the same style as ‘Supremacy’, but with quicker drumming, and all-around a more brutal delivery. It reminds me of NECROPHOBIC’s 1997 album, “Darkside”. On “A Scent Of Death”, INFUNERAL present a stylistically interesting and honest Black Metal record; recommended. More info: www.myspace.com/infuneral, http://odiousrecordingseurope.blogspot.com