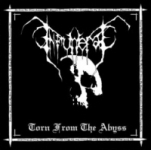 Rainfall, a crack of thunder, and the first heavy chord is struck on track 1 of INFUNERAL’s second full-length album "Torn From The Abyss", the follow up to 2007’s "Sepulchral Monument". The album formally begins with track 2, ‘Reveal The Horns’, a vicious yet eloquent assault. Melodic, slightly mournful, always beautiful and always deadly: hard to imagine this track not becoming a permanent addition to INFUNERAL’s live set. DISSECTION would be proud. ‘To Inter With Funeral Rites’ continues the trend, with a few more nods to Death Metal à la NECROPHOBIC. In contrast to the previous two tracks, ‘The Plague Of Humanity’ qualifies as more or less a typical Black Metal song, edging a little into tediousness, but thankfully scorning the endless repetition of a single boring riff like so many other so called Black Metal bands. ‘Dust’ may just be the best track on the album. The DISSECTION influence returns in full force. ‘Dust’ barely slows and the guitars resolve gracefully atop the ever-pounding drums all the way through until the end. The pace slows considerably to a fist-pumping anthem-like pace on ‘A Scent Of Death’ (‘A Scent Of Death’ is the title for INFUNERAL’s new EP, out on Odious Recordings) but speeds right back up for the 8th and final track ‘The Circle Master’. My second favorite, this song, as with ‘Dust’, brings DISSECTION to mind again, specifically the icy, mournful guitar tone of "Storm Of The Light’s Bane". This song has a great deal of atmosphere, raising powerful images of desolate icy plains stuck in an eternal void. This may not exactly strike you as ground-breaking, but INFUNERAL have talent and deserve some support. I recommend this album for any and all Swedish Black Metal fans. You won’t be disappointed! www.myspace.com/infuneral, www.blackcrowned.com