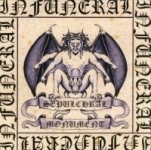 Sweden has a foothold in every kind of Metal now. They began with Metal, then Doom (CANDLEMASS), then Death Metal, Melodic Metal, and of course, Black Metal – though not necessarily in that order. MARDUK will always remain Sweden’s premier Black Metal band, but not the band to whom every Swedish band aspires to be (that would be ENTOMBED). INFUNERAL don’t sound like they’re trying to be MARDUK – just a Black Metal band. This is perfectly acceptable. After all, constancy doesn’t preclude a lack of quality. In fact, if the band knows what its doing, it means quality. DISMEMBER, for instance, aren’t original. However, they know what they’re doing and they do it well. INFUNERAL does the same. They play decent Black Metal; nothing more, nothing less. www.myspace.com/infuneral, http://get.to/infuneral, www.ironfistprod.se