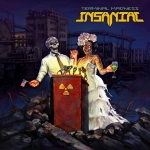 INSANIAC hailed from New Jersey and released four official demos between 1985 and 1990. I’m sure they had dreams of being picked up by a nationally distributed label and touring the world like their idols, but those opportunities eluded the quartet and with the changing of musical tides the group decided to call it a day in ‘91. Now over 20 years after their breakup some of the original members have regrouped and look forward to reliving their youth by playing some local area shows and writing some new tunes. In the meantime, AreaDeath Productions and the band have released this double-disc collection compiling the band’s proper demos, along with six bonus tracks. Beginning with 1985’s “Screams From The Asylum”, INSANIAC sound rather pedestrian playing their brand of Speed / Thrash Metal. There’s nothing really noteworthy from the five songs offered, other than a mixed bag ranging for decent opener ‘M.A.D.’ to the cringe-worthy ‘Daughter Slaughter’, but closing with the nice acoustic intro and clean singing of ‘Mission To Hell’ showing some signs of promise and originality. Well, INSANIAC delivered on that potential with their second demo two years later. 1987’s “Psychomania” opens with clean guitars setting a mood for the crushing onslaught where the band showcases so much growth, intensity, and much improved playing. INSANIAC comes up with interesting arrangements with a progressive flair adding their own originality delivered in face-crushing fashion optimal for the genre. I’m actually surprised when listening back to this 5-song demo that the band was not offered a deal for their services by one of the leading indie labels because songs like the title track and ‘Quiet’ hold up well (despite prophesying about the world’s downfall in 1998 – ha). Maybe that’s why they returned quickly the next year with another 3 songs on the “Plead Insanity” demo. Here the band stays true to their sound mixing an equal dose of aggression, complexity and groove wherever needed. The material again is top-notch and makes me wonder what the group missed out on doing to capture record company attention because on evidence of what INSANIAC was demonstrating on this 1988 demo they could have made a killer record. I like how the band allows the songs to breathe by going into plenty of musical interplay, kind of like a mix of latter day DARK ANGEL with prime-era TESTAMENT. Two years later and with a new bassist onboard the band released their final two demos the same year. 7 songs are split between the two cassettes and while true to the band’s legacy for some reason it lacks the same power and hunger of the early recordings. It’s still interesting in spots but it just doesn’t have the same immediacy and impact as their ’87-’88 recordings. Finally to round out disc 2 the band gives us some exclusive, unreleased treats comprised of a couple rehearsal recordings of songs in their infancy stages with different lyrics, in addition to earlier demo songs re-recorded in ’86 and ’89, and an unreleased song that didn’t make the ’87 demo. None of this warrants any musical notoriety but it’s cool for original INSANIAC fans to get a chance to hear. www.insaniac.com, www.facebook.com/insaniacnj, http://adp.areadeath.net