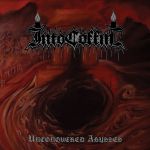 Beethoven’s Ninth Symphony is responsible for the maximal playing time of a Compact Disc. When it was invented the wife of Sony’s vice president thought it was good idea to establish a format which could host this fine piece of music and therefore the diameter was determined to 12 centimeters. Honestly I do not know if this anecdote is true, but a nice story anyway. Three years after their first full-length “Into A Pyramid Of Doom” German based INTO COFFIN are using the full width of this medium (the vinyl version is released as double LP) and like the title of the debut suggests, the band has a tendency towards Doom Metal, but “Unconquered Abysses” has much more to offer. Besides a large proportion of Doom Metal the decent listener is about to explore up-tempo Death Metal parts, even up to sheer aggressive tremolo picking riffing. There are vocals somewhere in the background, mostly deep singing on the edge of grunting, then more chanting and husk mourning. When it comes to a mixture of Death / Doom Metal of course everyone has ASPHYX on his or her mind. On one side the comparison is traceable, but on the other hand INTO COFFIN are taking the things one step further. The four songs are developing in a meandering and winding way, in fact all songs are merged together to one hypnotic and swirling piece of music with an atmosphere that can only be described with darkest words like bleakness, desolation and despair. A maelstrom of an cosmic void. Very impressive and in spite of the long playing time it never gets boring. Anyone courageous enough to conquer the “Unconquered Abysses” should visit www.facebook.com/intocoffin or www.tfhrecords.com for more information.