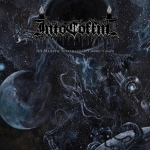 INTO COFFIN
The Majestic Supremacy Of Cosmic Chaos
(Terror From Hell Records)
28:36min

It was only last year that the German three piece INTO COFFIN released their great first album “Into A Pyramid Of Doom”. Their progressive approach to Doom Metal really hit my nerve, since they refined their Doom Metal with elements of Death and Black Metal, thus creating a unique blend of great music. Now, a little more than a year later, INTO COFFIN are back again with new stuff. “The Majestic Supremacy Of Cosmic Chaos” is the title of a record that is said to be an EP, in lack of a better description. Only two new long songs here with a running time of nearly half an hour made me hop up and down inwardly in sheer anticipation. And I was not one bit disappointed. Of course INTO COFFIN haven’t changed their style, yet they recreated it a little bit with more stress on Black Metal instead of viscosity. Thus ‘Crawling In Chaos’ comes along even more interesting than the old stuff, being a progressive and at the same time monolithic masterpiece of the extreme. And the other tune ‘The Evanescence Creature From Nebula’s Dust’ is as huge as the first one with a slight nod to the times when DARKTHRONE were at their peak. So, musically “The Majestic Supremacy Of Cosmic Chaos” is as much my cup of tea as the album, and INTO COFFIN even managed to notch up their performance. Furthermore, the sound of the recordings is a little less raw, but more professional and far away from any hint of whimpiness. In my humble opinion, INTO COFFIN released one of the absolute highlights of 2017 with “The Majestic Supremacy Of Cosmic Chaos” and so I leave anyone of you with the advise to check this one out. Get more info at www.facebook.com/intocoffin, and visit www.tfhrecords.com as well, and if it’s just to find out that there will be a vinyl version of this EP, too.