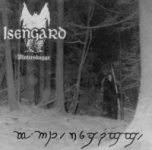 As some of you know, and others of you don’t, Isengard is not only the castle of Saruman but also an old project of Fenriz from Darkthrone. He did one demo in ’89, one something in ’91 and one chapter in ’93, as well as releasing one album in addition to “Vinterskugge”. “Chapter One – Vandreren” was made in ’93. It’s obvious that the Folk-Metal project by Satyr and Fenriz was coming when you listen to this chapter. Fenriz tried his majestic vocals for the first time, and somehow they work. His vocals work in the sense that they fit to the music he made, despite the charming way he missed a tune every now and then. That this is a (solo) project can be easily heard in the sense that every track differ a lot from the next. Like, the opener ‘Vinterskugge’ is Folk-Metal, the second is an instrumental which is basically some guitar noise probably made during some heavy drinking while the third ‘Ut I Vannets Dyp Hvor Mørket Hviler’ is Black Metal in the vein of, well, Darkthrone Black Metal. And so it differs throughout all seven tracks in the first chapter. That the whole chapter is badly produced is, looking in retrospect, just charming and actually the way it should be. “Chapter Two – Isengard Demo “Spectres Over Gorgoroth”” is just that, the demo. And it was four tracks of pure Black / Death Metal (and the only reason why I considered this digipak re-issue of an overall horrible album worthy to be added to my collection! – Ed.), with influences also from such a band as Autopsy in the track ‘Deathcult’. Despite the horrible sound, the music is really way better compared to many a Black Metal band, naming… Damn, if I even had remembered those horrible bands I should definitely have mentioned them. “Chapter Three – Horizons” contains some heavy Celtic Frost preferences, and makes me think that “Panzerfaust” from Darkthrone didn’t come as a surprise, looking back at it now. It’s easy to notice that Fenriz have some irony, as the last track ‘Our Lord Will Come’ has an ironic vocal, where Fenriz probably would laugh himself to death if anybody took this seriously. “Vinterskugge” as a whole is an album filled with experimentation and visions, but as a one-man task I wouldn’t claim this the most skilled album I’ve ever heard, as most of what you’d call tightness is looked up in a safe somewhere. But charming, definitely.