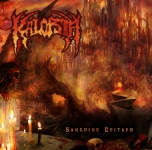 KALOPSIA are rather new to these pages. In fact, they are not really new, but around for fifteen years now. Two albums (“Exquisite Beauty Of The Defiled” in 2003 and “Amongst The Ruins” in 2012) and two demos are in their discography to date. And the guys in the band aren’t blank pages either, since guitar player and singer Matt Medeiros is active in FUNEBRARUM as well, while Steve Horvath, the other guitar player, plays in DETERIOROT and drummer Jason Spaeth is in ABACINATE, among others. So much for name dropping here. What does this four piece from New Jersey have to offer on their newest EP “Sanguine Epitaph”? Well, brutal Metal of Death is the game of KALOPSIA, not too technical, but not so simple that it becomes boring. And the names FUNEBRARUM and DETERIOROT are good references as well, yet KALOPSIA are KALOPSIA for sure! Songs like the brutally grooving opener ‘Deepen The Wound’ with its hate-filled breakdown plus a fast outbreak should satisfy any aficionado of the brute. The rather complex ‘Invoken The Curse’ (taken from their 2011 demo) starts off pretty chaotic, before the groove prevails and calms down the speed. ‘Feasting On Mankind’ is a short, but fierce LIVIDITY cover that fits very well on this EP. With ‘Cemetary Wreath’, KALOPSIA combine violence and melodies, those harmony leads are the most calming moments on “Sanguine Epitaph”. Finally ‘Toolshed Therapy’, a re-recorded song from their first album, re-invents the brutal groove again, yet shows the most diversified moments of KALOPSIA. To sum it all up: “Sanguine Epitaph” is a great find for those into fine brutal Death, a band worth checking out. Do so at: www.kalopsia.org, kalopsia.bandcamp.com, and visit the label in charge for “Sanguine Epitaph” as well: www.facebook.com/godeaterrec