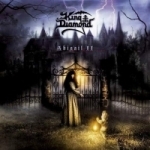 "KING DIAMOND play very complicated, but at times quite melodical Heavy Metal. Their vocalist has very wide vocal range and the guitarists know to handle their instruments pretty well. Quite good album. By or die. Support the major underground". Nice review, isn’t it? But even any nonsense of such kind hasn’t been written here in VFTD about the new KING DIAMOND album up to this day, though some 2-3 months have sinked into oblivion since our much-esteemed editor-in-chief first tried to find among his contributors anyone interested in reviewing it. My first reaction to this was like: "Don’t you, dear colleagues, find it at least a bit roughly towards Mr. KD to ignore his efforts after all he’s done for Metal?". This injustice should have been eliminated as soon as possible, so when I finally layed my hands on the album in question I was ready as Hell for Revenge. But a couple of first attempts have cooled my temper a bit, having made me think that my colleagues, on the contrary, were making KD a favour NOT reviewing this album. Moreover, I didn’t even understand what made me to give the disk some more spins. Was it just my blind admiration for the art of the maestro? Or maybe some youthful naivety and undying hope to hear from him anything of "Don’t Break The Oath" or "Abigail" caliber once again some lucky day? I guess all that plus the firm belief that like any other KD album, "The Revenge" must have had something special, something to attract your attention and make you come back to it again and again even if at the first listen it didn’t impress you too much. Or even at all. And yes, my stubbornness was rewarded! "The Revenge" is growing on you, slowly but unavoidably. Growing like a shadow in the evening, like a shadow of the mansion of Count de La Fey. Indeed, it’s a kind of album one starts to enjoy as soon as he / she manages to set one’s mind free from the pernicious habit of comparing. "Don’t Break The Oath" is considered by many the very best thing King has ever been involved in, well, but isn’t it a bit stupid to await from every new of his efforts to be Part II of that album and is it correct to compare them all to "… The Oath" again and again? If one of your children is in any way closer to your heart than the rest, is it reason enough to neglect or even hate the others? And, finally, take a look inside yourself – are you the same as you were when "Don’t Break The Oath" was laid onto your turntable for the first time? Are you still able to perceive the music the same way you used to many years ago? That’s it. So leave all your complaints behind and enjoy the continuation of the "Abigail" story – maestro has done his best to entertain you, so do not disappoint him. The idea of bringing Abigail back from the dead must have been pretty exciting, though a bit venturesome. Ruining anything great is easy, creating it is so much harder. The parallels with the original "Abigail" are quite evident one time, or barely perceptible the other, but I believe there’s nothing good in trying to dissect the album and explore it in pieces. It’s one hell of a conceptual album and should be judged that way, as a whole. Still the most dramatic difference between the original "Abigail" and her junior sister is that while the former album was one big masterpiece in every single detail, the solid foundation made of one unbroken piece, the latter is rather the collection of some nice pieces generously alternated by more ordinary (though still quite listenable) ones. But even if this music doesn’t live up to high standards of "Abigail", its cover artwork most definitely does! Such nice pictures make you long for the great times of LP sleeves covering your walls once again. You’d laugh, I know, but I dare say that our favorite multivocalist did manage to find even more shades to his already incredibly wide vocal range. Unbelievable, but it seems like here we’re presented to something new in his vocals, not heard before. I know that it’s simply beyond the human capabilities, but excuse me, are we talking about the human beings here or about King Diamond? Ah, you’ve got the point, fine…"That’s the end of another lullaby. Time has come for me to say: Goodnight".