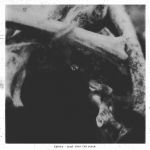 As the attentive readers have noticed, this output is released by Terratur Posssessions, one of the most important sources of Black Metal during the last years. Important in the meaning of quality. As a Black Metal fan you could have easily purchased every release by the Norwegian label. And, guess what, the debut by KRINGA makes no exception. The foursome from Austria is active under the moniker KRINGA since 2009 and they released all in all three demos and three EPs, of which the last two even made it to CD format. By the way, the name KRINGA was inspired by a village in Croatia of the same name, where the first in written form documented case of a vampire happened, back in 1656. Quite obscure, I guess the cover shows the mortal remains of Jure Grando, the supposed revenant. An interesting story, same goes for the music on "Feast Upon The Gleam". The decent listener is about to discover a versatile mix from blazing, grim up-tempo to slower and dragging songs. Especially those sluggish parts are great, because the varying vocals can unfold. The range of emotions goes from aggression to despair, but at every moment with an occult and obscure touch. Musically KRINGA are able to cover different genres of Black Metal and interestingly it sounds absolutely homogenous and completely rounded. Be it more raw and frenzy, desolated distress or epic and vigorous – KRINGA are mastering all varieties. Do not hesitate and visit the band at www.facebook.com/theblazeofkringa or the label at www.terraturpossessions.com or your preferred Black Metal merchant. Last info: the previous EPs "Total Mental Desecration" and "Through The Flesh Of Ethereal Wombs" are planned to be re-leleased in 10" vinyl format.