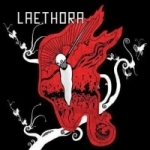 As a great fan of Dark Tranquillity (especially the three first albums) I was eager to check out Laethora’s debut album (Dark Tranquillity guitarist Niklas Sundin and guitarist Joakim Rosen, from The Provenance, comprise the creative core of the band). The music is very different from what one might expect from these guys; "March Of The Parasites" is a sold dose of Death / Grind firmly rooted in the tradition of Napalm Death. The "retro" aspect is present throughout the album, both in terms of the music and the production. Still it is not really a retro album in the ordinary sense. Even though the guys indulge in their love for early 90s Death / Grind and even Punk / Hardcore, they also flirt with Doom and even elements which have a certain cold, "industrial" feel to them. Guitarist Joakim is a great fan of Emperor and this influence is also present in the form of synths, "Black Metallish chords" and dark atmospheres. The lyrics seem to be in the tradition of Napalm Death – there is a message and not just blood/gore and misanthropy. Although misanthropy is present, there seems to be a "positive intention" behind. I want to give the band credit for this. Only one riff reminds me slightly of the "Gothenburg sound", so the album is very different from what one might expect given the fact that Niklas has been involved in the songwriting. The music is varied and there is a great balance between blast parts, groovy parts and the doomy / "industrial" / atmospheric parts. Death Metal has lately become a kind of competition in technicality and speed, and I believe that Laethora is one of those bands which are much needed to keep the scene innovative and varied. What is needed to move forward may sometimes be to take one step back.