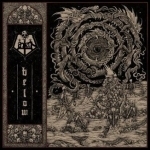 An invasion of new Finnish Death Metal bands continues victoriously. Enter LANTERN that is basically a sole creation of Mr. Cruciatus, who plays all instruments on the band’s debut studio album by himself, only vocals being handled by Mr. Necrophilos. So, the obvious question is what is this LANTERN then all about? Well, feel free to crucify me if I don’t tell you the truth but LANTERN is actually one hell of an amazing Death Metal unit when it comes to "Below". In fact, despite being a Finnish band, they don’t have that ‘Finnish’ tone in their sound much at all. On the contrary, I would rather compare them to some US Death Metal acts like INCANTATION but especially IMMOLATION. Throw in some Swedish LEPROSY (R.I.P.) – and specifically Patrik Olofsson type of vocal lines, and we are quite close how this 2-piece act LANTERN does sound like. Of course without a lack of any better comparisons, I dunno whether any comparisons are needed in the first place either. LANTERN’s dark, continuously well-flowing unorthodox riff fests and kinda complex and clever tempo changes really hit bull’s eye on "Below", nailing its listeners ears down somewhat indelibly. It’s pretty obvious LANTERN has found a winner’s concept on "Below"; something every other Death Metal band also should strife for on their own releases. A very convincing release from LANTERN here indeed, probably ending up on my top 10 list when the year has come to its end. Time will obviously tell… More info about LANTERN at: lantern.dy.fi, label: www.darkdescentrecords.com