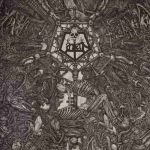 Morphosis means modification or development (in an organism). A well chosen title, since it could describe the evolution of this band in their relative short existence. Or it could refer to Death Metal in the present year (2017). An album like "II: Morphosis" contributes to the genre to move forward instead of sticking to the glory of the past. Also Dark Descent Records deserves all credits for supporting bands like LANTERN. For those unfamiliar with them, let’s start with a short bio. The band was formed in 2007 and is located in the Finnish Kuopio. Cruciatus handles all instruments and is supported by vocalist Necrophilos. In 2008 they released the demo "Virgin Taste Of Damnation" and in 2010 the demo "Doom-Scrawls" followed. The EP "Subterranean Effulgence" from 2011 was a cool and atmospheric release, but this was topped by the magnificent full-length "Below" from 2013. The music on it was a mix of Death and Black Metal with a very strong, cavern sphere. Partly by the reverbs in the production with its chaotic and dry sound. Partly because of the melodies that fully grasp your soul. The songwriting is a trump and alters with each track. It is subordinate to the atmosphere, that permits all requirements and preferences. On "II: Morphosis" the production immediately strikes, which is tighter and clearer. Melodies emerge and show another deviation with its predecessor "Below". The intoxicating effect that remarked "Below" is gone. Still "II: Morphosis" has a charm with haunting almost Thrash like melodies. Another strong element of LANTERN is their emphasis on good songwriting without binding themselves to the limits of directives or frames. Especially in the moments when they slow down they’re powerful and this creates great moments like in ‘Hosting Yellow Fungi’, ‘Transmigration’ or ‘Virgin Damnation’. ‘Lucid Endlessness’ captures the structure of this album in one song. LANTERN fits in the row of valuable bands like BLOOD INCANTATION, VENENUM, BEYOND and KRYPTS, just to name a few. Colonists that explore the far corners of darkness to settle. Courageous and in the interest of us all. For more info, check www.facebook.com/lantern666, www.darkdescentrecords.com