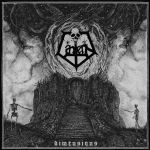 What a year… without doubt this one has been extremely special in every sense as we know, and at some point I’ve been losing my sense of prediction since everything seems to be changing or at least, turning the wheel at different angulations and revolutions as days cloak behind mountains of dusk and confinement. On other catastrophic wings that drops feathers filled with uncertainty, LANTERN with their third album “Dimensions”, belongs to this strange and refreshing wave of forthcoming Death Metal with the intention to explore on new grounds over the same planet. 39 minutes perfectly compressed on just 6 songs demonstrates the experience of merging into an abyss with randomized patterns, which are constantly changing as the releases grows. ‘Strange Nebula’ opens the portal within a maelstrom of interesting guitars, dissonances made on purpose and dynamics that could fall on the edge of technical Death Metal for some ears. Now, in order to not spoiler too much on this album and ruin your experience, I’ll skip to ‘Cauldron Of Souls’ which is a bonfire in the dark when after a long travel gives you solid earth to step in, developing catchy patterns and tunes on the verge of an aggressive approach tempo attack, as the vocals expels some FUNERAL NATION odour on its passing. Finally, another remarkable one is ‘Monolithic Abyssal Dimensions’, a 14 minutes track introducing some acoustic and eerie guitars to summarize the previous riffing and schizophrenia on this song filled with flattening bass melodies and a strong composition within the context of this evolutive album. Another aspect to mention, is the turn on the vocalization from their first records to this, an opening of the throat giving more versatility to LANTERN’s music instead of staying in the cavernous and compressed ambience. Certainly, “Dimensions” needs the right amount of attention on how it develops to realize that the order of the songs is mandatory for an outer experience as well as ZEMIAL’s “Nykta” just to evoke the idea, because as the minutes go by the initial feeling of chaos and madness lands on other dimensions as the title suggests, the journey starts to fall on known soil without losing the surprise factor. On their variations LANTERN finds virtue, and having their foots so attached to the void is the key to deliver top notch Black Death Metal quality for them, which compared to their previous releases as “Below” for example, seems now mature and genuine as the time gives them the reason. For sure one of those releases that you have to digest from beginning to start a couple of times, with hints here and there of DEATH, ATHEIST, STARGAZER, NOCTURNUS / AFTER DEATH and a long etc… but hey, this is LANTERN, beware! www.facebook.com/lantern666, www.darkdescentrecords.com