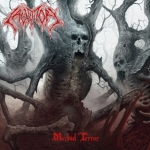 LAVATORY is a fine revelation for a Death Metal band from Malaysia. I was quite impressed listening to the debut EP and was eagerly awaiting the follow up album. It’s not too often that you come across some ASPHYX worship band and given that style, it’s something that’s always thrilling. It’s a different, scathing kind of extremity, the kind that doesn’t fail to grow hair on the back of your neck. As long as it’s not emasculated, it will sound good. It can however fall into the different eras of ASPHYX where the band can play fast or slow, even as slow as the Doom / Death bands. LAVATORY thankfully eschews for the most part the extremely slow and dragging kind of Death Metal and opts rather for the OBITUARY style of execution – CELTIC FROST influenced but unrelenting when it comes to the viciousness. It’s most reminiscent of "Slowly We Rot" era of that band where songs weren’t as developed but the band made up for that with the sheer expression and power, which is kind of the case here. The lead-playing is similar but perhaps not as proficient but then OBITUARY had a rare class. The song lengths average four minutes and you may not expect epics just yet from this band. Not everyone can pull that off but the idea is to keep your sound intact while trudging ahead – AFFLICTION GATE manages to achieve that to an extent. It is another contemporary of the ASPHYX worship ilk of bands. This is essentially channelling the sounds of two scenes – Swedish (think NIHILIST, ENTOMBED, CARNAGE, DISMEMBER) and American (OBITUARY, DEATH) via the template laid down by ASPHYX. I’d have wished for more German Death Metal structuring à la FLESHCRAWL or ATROCITY, but this works as well. The songs are memorable only in parts, with the vocal patterns standing out the most. The riffing is slightly hackneyed but doesn’t seem out of place, which is good enough perhaps. Is this worth your time? Definitely. It’s very competent and the shortcomings are overcome by the intensity with which the band goes about its music. Anything less and the band would’ve fallen flat on its face. This is suitably balanced, well-rounded album that is trying to get more adventurous which is the right way to go about it. It’s perhaps missing a distinct flavour which is something it could work on. But the idea of ASPHYX meets ENTOMBED meets OBITUARY sounds good enough on paper and in reality. This band lives up to the expectations given by this kind of a description. The music is a tad simplistic but if you like OBITUARY, you shouldn’t mind all that. Ultimately, it’s the effectiveness that counts. If you like it, you’re happy. There’s no point in nitpicking as long as the purpose is served. In comparison to the US and Swedish counterparts back in the day, the sound seemed a tad flat or not as dynamic but it’s sufficiently fuzzy and clear, if lacking the gigantic tone. A couple of listens and it works out well. That’s the problem you face trying to sound too much like your idols. Comparison is inevitable in that case. But these guys make them proud and we should be happy that there are young bands still pursuing that sound, a different and probably a more difficult kind of extremity as opposed to the uninspiring brutal Death Metal style, which has its appeal as well albeit diminished due to redundancy. LAVATORY has lived up to its promise and this release, the band’s full length debut, is recommended to all fans of old school Death Metal, especially of the aforementioned bands. Let’s hope the band is able to hone its skills some more and carve an identity of its own somewhat in the future. www.facebook.com/lavatorydeath, www.pulverised.net