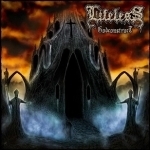 Hailing from Dortmund, deep in the heart of the German Ruhr Valley, LIFELESS are around for quite a few years now. It took the band two years to record and release their debut album "Beyond The Threshold Of Death" in 2008, which was later re-released by Ibex Moon. Now they signed with Germany’s premier Death Metal label F.D.A. Records and after a split 7" with CHAPEL OF DISEASE they finally released their second album after a nearly five year break. "Godconstruct" saw the light of day early this year and is a massive step forward, measured against their debut. It seems to me that the band have become tighter and grew more into a good team. The music we find here still can only be compared to classic Swedish Death Metal acts like DISMEMBER, ENTOMBED or GRAVE, but LIFELESS found their own way of playing raw, yet melodic stuff by absorbing influences from all periods of Death Metal. After an intro (‘Praeludium: Endzeit’), the title track ‘Godconstruct’ comes along as a very brutal opener with great harmonies. This song was already featured as a taster on the split 7", by the way. ‘ Towards Damnation’ or the fine ‘Moribund` keep up this golden stream, while songs like ‘Seething With Rage’ and ‘Blindead’ come along with Gothenburg-style guitar harmonies, close to early IN FLAMES. Even Viking Death heroes AMON AMARTH left their mark in the riffing of ‘Blood For The Gods’. ‘The Truth Concealed’ is my personal highlight with its samples, which continue in the instrumental ‘Interludium: Zeitenwende’. And ‘Sworn To Death’ surprises with vocal parts so close to Martin van Drunen that I asked myself if it is not Martin himself doing some guest vocals here. But I haven’t found any proof for this proposition (it’s actually Sven Groß from FLESHCRAWL and Mark Friedrichs from SELFDEVOURED – Frank). The vigorous up-tempo smasher ‘Perdition Of The Whore’ closes a very solid and entertaining Death Metal album of a band, that still has room for some development in the future. If you dig old school Death Metal and prefer the Swedish way, make sure to check LIFELESS out on: www.facebook.com/pages/lifeless/152555931488020, www.fda-records.com