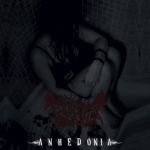 LIFELESS from Mexico or Italy or whereever they are based now (not to be confused with the german Death Metal horde) are retunring with their second album “Anhedonia” via Talheim Records. Already the cover artwork reminds me of old FORGOTTEN TOMB, so the musical direction was not hard to guess. And yes, the opener ‘Emp-Ti-Ness’ starts pretty calm with rain falling in the back, spoken passages and a calm piano. ‘Ashes Of Hopes And Dreams’ starts also quiet, but gets pretty intense and harsh soon. Yes, FORGOTTEN TOMB again comes into my mind as a warm female voice gets accompanied by harsh screams. An interesting fact is that the vocals are female so this is the first time I hear these mournful cries from a woman and somehow it sounds interesting. ‘Trapped In The Void’ varies between slow and fast and is not less intense even though the drums sounds very tinny here but the fine keyboards save the song from getting destroyed by the sound, which is surely meant to be raw, but in the end simply is too thin produced. Apart from the production, which is bad, the female trio did everything right as they managed to capature despair, melancholy and hopelessness in music and have a pretty good sense for songwriting, song structures and sounds. Every little sound is where it belongs and there is nothing to improve in the songwriting or instrumentation. The female screams are surely different, but the mixture with the normal female vocals in the back really spark a suicidal atmosphere. After a shitty week this album definitely is the right soundtrack to end the suffering. If I survive this, I wish for a little better production on the next album, but they should definitely release some more stuff. For more info please check one of the following sources, then cut yourself and drain from blood! More info you will find at: www.facebook.com/lifelessbandofficial, www.facebook.com/talheimrecords