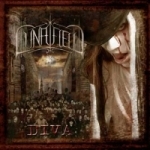 Never judge a book by its cover… or so they say. Why do I mention this? Well, a look at the cover artwork and the photography included in the booklet of this promo triggered a medium to heavy “fag gothic alarm”. I guess the band (or the management) assumes that by adopting a Marylin Manson / Dimmu Borgir-esque look (a skinny guy in a breast free corset) combined with the visuals of NIN’s ‘The Perfect Drug’ video (rest of the band with long quasi – victorian coats and and guns) with lots of make-up run over by some sepia toned Photoshop colouring filters some younger customers can be gained… anyway. Musically LUNA FIELD avoid the cheesiness that one could expect and deliver a convincing Death Metal record with overtones from the mid nineties North American sound and some scarce Black Metal influences that shine through in some screeching vocal parts and some melody lines. The overall rhythmic structure seems to take its influences from the likes of MORBID ANGEL (“Covenant” – era), DEICIDE and some newer CANNIBAL CORPSE (especially some tapping patterns hint at that) mixed with a good dose of thrashing dynamics and nice guitar leads. It is obvious that the musicians involved know what they are doing and that quite a bit of effort has been put into the songs to keep them varied and not applying the same writing formula over and over. I don’t know how prominent the Black Metal influences were on their Season Of Mist – debut “Close To Prime” but here there is an occasional epic riff and some dashes of keyboard here and there – with the exception of the last song ‘Diva Massiah’ that sounds like a Black Metal ballad, hehe. Apart from the already mentioned blackish scream the vocalist delivers the goods in an understandable deep to mid-ranged way, reminding me a bit of the vocalist from MENTAL ABERRATION. To add up to the “listening experience” various midtros have been placed between the songs. This slab has been produced by Alex Krull and the sound is more than decent. Have a look at: www.luna-field.de